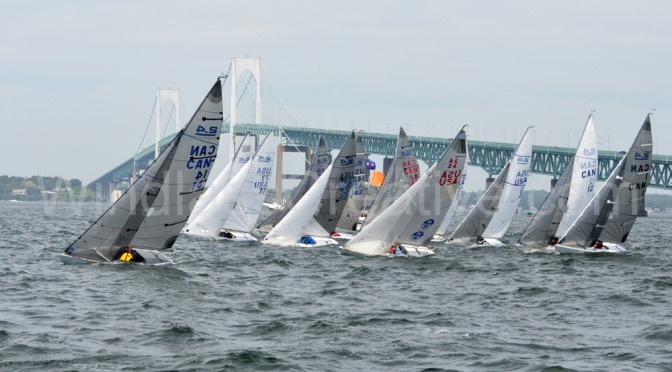 NEWPORT, RHODE ISLAND (May 14, 2017) – Metre boat sailors from four corners of the United States and Canada enjoyed a spectacular weekend of racing at METEREFEST NEWPORT 2017. By all accounts, the inaugural regatta for International Rule sailing yachts, held in conjunction with New York Yacht Club’s 163rd Annual Regatta with support from Ida Lewis Yacht Club and Sail Newport was a huge success. Jamie Hilton, METREFEST NEWPORT 2017 Chairman said: “The idea of bringing Metre boat sailors of all different stripes together at one event proved to be more fun than we had even hoped. Sailors and skippers from all 3 classes on hand were very enthused at the event and were universally clamoring as to when and where the next METREFEST will be!”

In the largest fleet of the regatta with 17 entries on the starting line, Dee Smith, US-7 dominated the 2.4mR class chalking up a perfect regatta. Not only did Smith win every race, he led at every single mark rounding. Ben Hall, US-77 placed second overall with 13 pts. and Theodore Green, US-175 finished third overall with 15pts. In Friday’s Around Rose Island Race, Theodore Green, US-175 finished second with Charles Rosenfield, US-142 (Woodstock, CT) in third. At Friday’s METREFEST NEWPORT 2017 dinner, upon accepting his Around the Island prize, Dee Smith suggested staging a 2.4mR World Championship in tandem with the 2019 12mR World Championship in Newport; his idea was met with resounding cheers from the 300+ gathered Metre sailors.

Results in the 6mR Class were more mixed. Matt Brook’s Lucie, US-55 won the Around the Island Race on Friday followed by Thomas Rodes’ Discovery, US-109 (Cambridge, MA) in second and William Booth’s Flapper, N-71 in third. It was Booth’s Flapper, N-71 who won the weekend regatta however with a total of only 6 pts.

12mR Laura, KZ-5 and 6mR Lucie US-55 each won their division in Friday’s Around the Island Race. (photo: James Hilton) 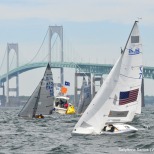 Dee Smith, in US-7 sailed a perfect regatta at NEWPORT METREFEST 2017!

12mRs starting together in close quarters.

Dee Smith, in US-7 sailed a perfect regatta at NEWPORT METREFEST 2017!

6mRs reach across the racecourse. 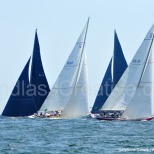 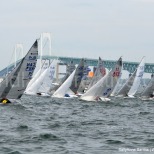 The fleet of 2.4mRs, 17 strong was just one measure of success for METREFEST NEWPORT 2017. 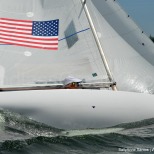 2.4mRs racing near the Newport Bridge. 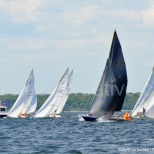 William Booth’s Flapper, N-71 set the tone for the weekend in Saturday’s first start squeezing out Jerry Goldlust’s Cherokee, US-53 and Hugh Jones’ Madcap, US-21 at the pin. (photo: SallyAnne Santos | WindlassCreative.com)

The 2.4mR fleet chases Dee Smith in USA-7. With his Around the Island Race win on Friday and 3 bullets today, Smith has sailed a perfect regatta to date.

The Full Moonrise over Newport highlights Traditional 12mRs Weatherly (US-17) and American Eagle (US-21) who won her division in the Around the Island Race today.

FRIDAY – Around the Island